The Git interface you've been missing all your life has finally arrived.

Work quickly, safely, and without headaches. The Git interface you've been missing all your life has finally arrived. 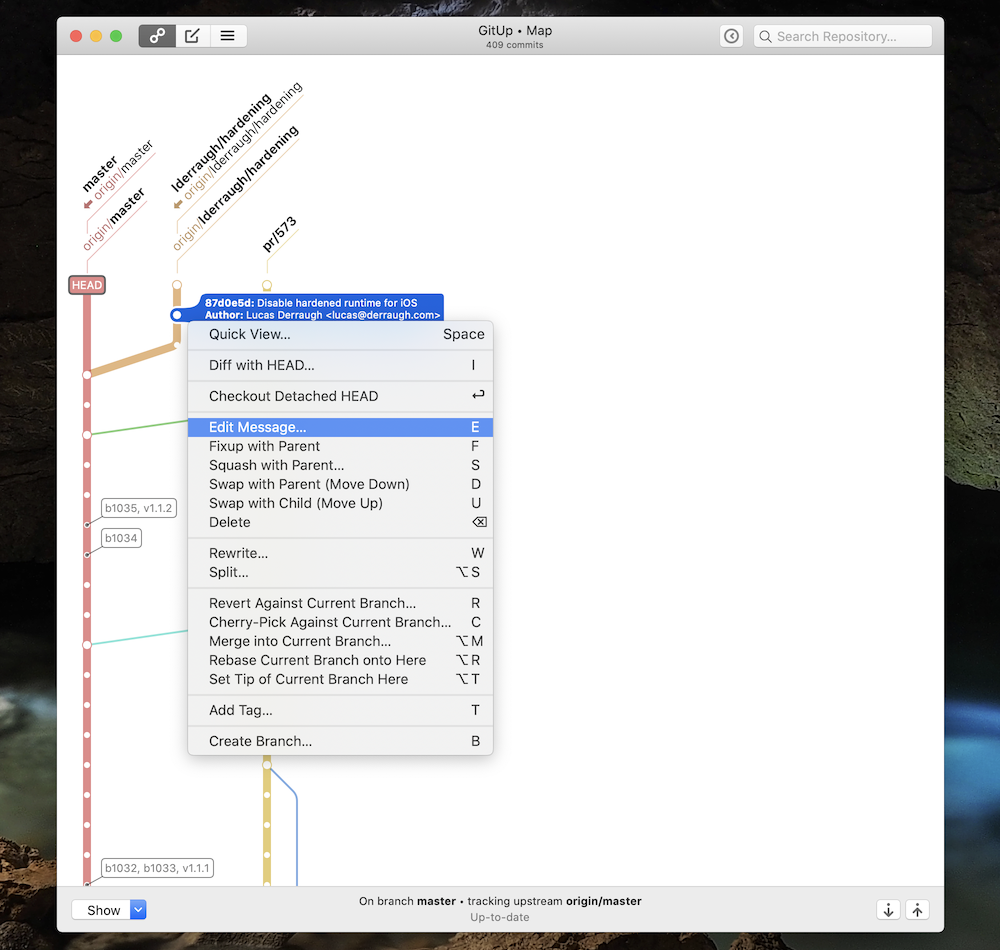 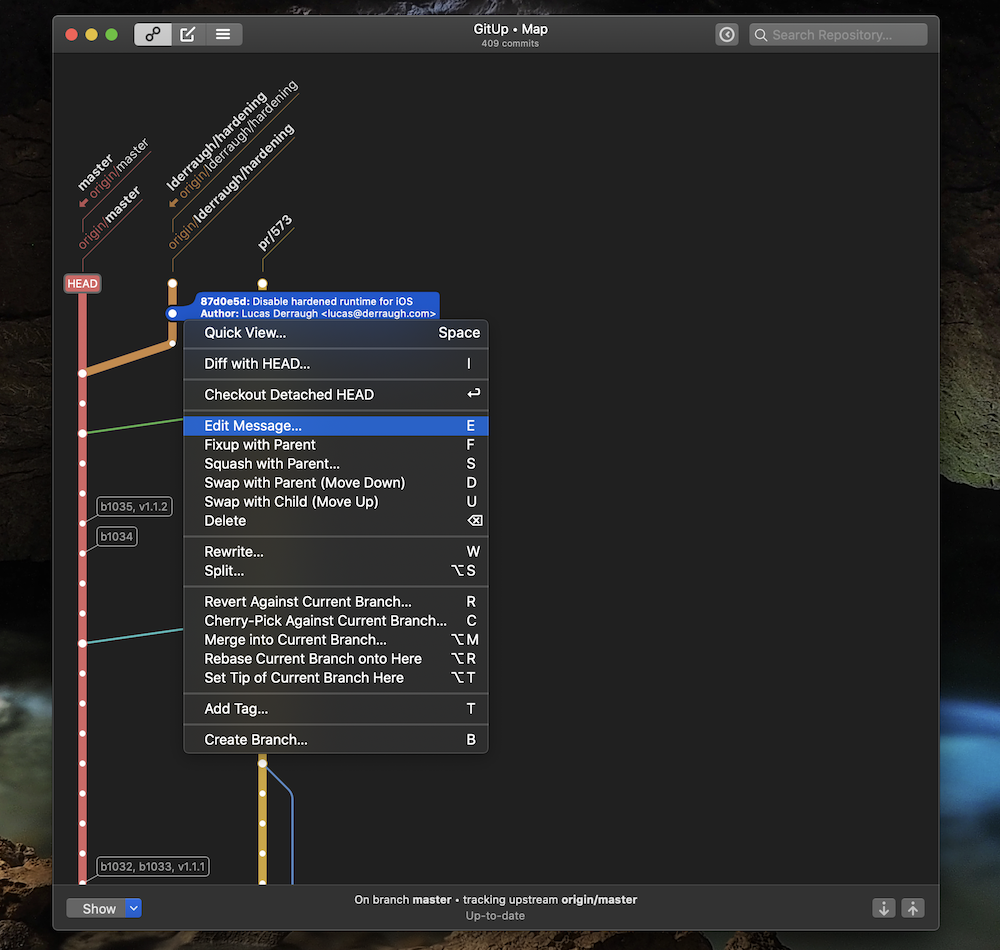 Git recently celebrated its 10 years anniversary, but most engineers are still confused by its intricacy (3 of the top 5 questions of all time on Stack Overflow are Git related). Since Git turns even simple actions into mystifying commands (“git add” to stage versus “git reset HEAD” to unstage anyone?), it’s no surprise users waste time, get frustrated, distract the rest of their team for help, or worse, screw up their repo!

GitUp is a bet to invent a new Git interaction model that lets engineers of all levels work quickly, safely, and without headaches. It's unlike any other Git client out there from the way it’s built (it interacts directly with the Git database on disk), to the way it works (you manipulate the repository graph instead of manipulating commits).

With GitUp, you get a truly efficient Git client for Mac:

GitUp was created by @swisspol in late 2014 as a bet to reinvent the way developers interact with Git. After several months of work, it was made available in pre-release early 2015 and reached the top of Hacker News along with being featured by Product Hunt and Daring Fireball. 30,000 lines of code later, GitUp reached 1.0 mid-August 2015 and was released open source as a gift to the developer community.

Learn all about GitUp and download the latest release from http://gitup.co.

Read the docs and use GitHub Issues for support & feedback.

To build GitUp yourself, simply run the command git clone --recursive https://github.com/git-up/GitUp.git in Terminal, then open the GitUp/GitUp.xcodeproj Xcode project and hit Run.

IMPORTANT: If you do not have an Apple ID with a developer account for code signing Mac apps, the build will fail with a code signing error. Simply delete the "Code Signing Identity" build setting of the "Application" target to work around the issue:

Alternatively, if you do have a developer account, you can create the file "Xcode-Configurations/DEVELOPMENT_TEAM.xcconfig" with the following build setting as its content:

For a more detailed description of this, you can have a look at the comments at the end of the file "Xcode-Configurations/Base.xcconfig".

GitUp is built as a thin layer on top of a reusable generic Git toolkit called "GitUpKit". This means that you can use that same GitUpKit framework to build your very own Git UI!

GitUpKit has a very different goal than ObjectiveGit. Instead of offering extensive raw bindings to libgit2, GitUpKit only uses a minimal subset of libgit2 and reimplements everything else on top of it (it has its own "rebase engine" for instance). This allows it to expose a very tight and consistent API, that completely follows Obj-C conventions and hides away the libgit2 complexity and sometimes inconsistencies. GitUpKit adds on top of that a number of exclusive and powerful features, from undo/redo and Time Machine like snapshots, to entire drop-in UI components.

The GitUpKit source code is organized as 2 independent layers communicating only through the use of public APIs:

IMPORTANT: If the preprocessor constant DEBUG is defined to a non-zero value when building GitUpKit (this is the default when building in "Debug" configuration), a number of extra consistency checks are enabled at run time as well as extra logging. Be aware that this overhead can significantly affect performance.

Using the GitUpKit API should be pretty straightforward since it is organized by functionality (e.g. repository, branches, commits, interface components, etc...) and a best effort has been made to name functions clearly.

Regarding the "Core" APIs, the best way to learn them is to peruse the associated unit tests - for instance see the branch tests for the branch API.

Here is some sample code to get you started (error handling is left as an exercise to the reader):

Opening and browsing a repository:

GitDown is a very basic app that prompts the user for a repo and displays an interactive and live-updating list of its stashes (all with ~20 lines of code in -[AppDelegate applicationDidFinishLaunching:]): 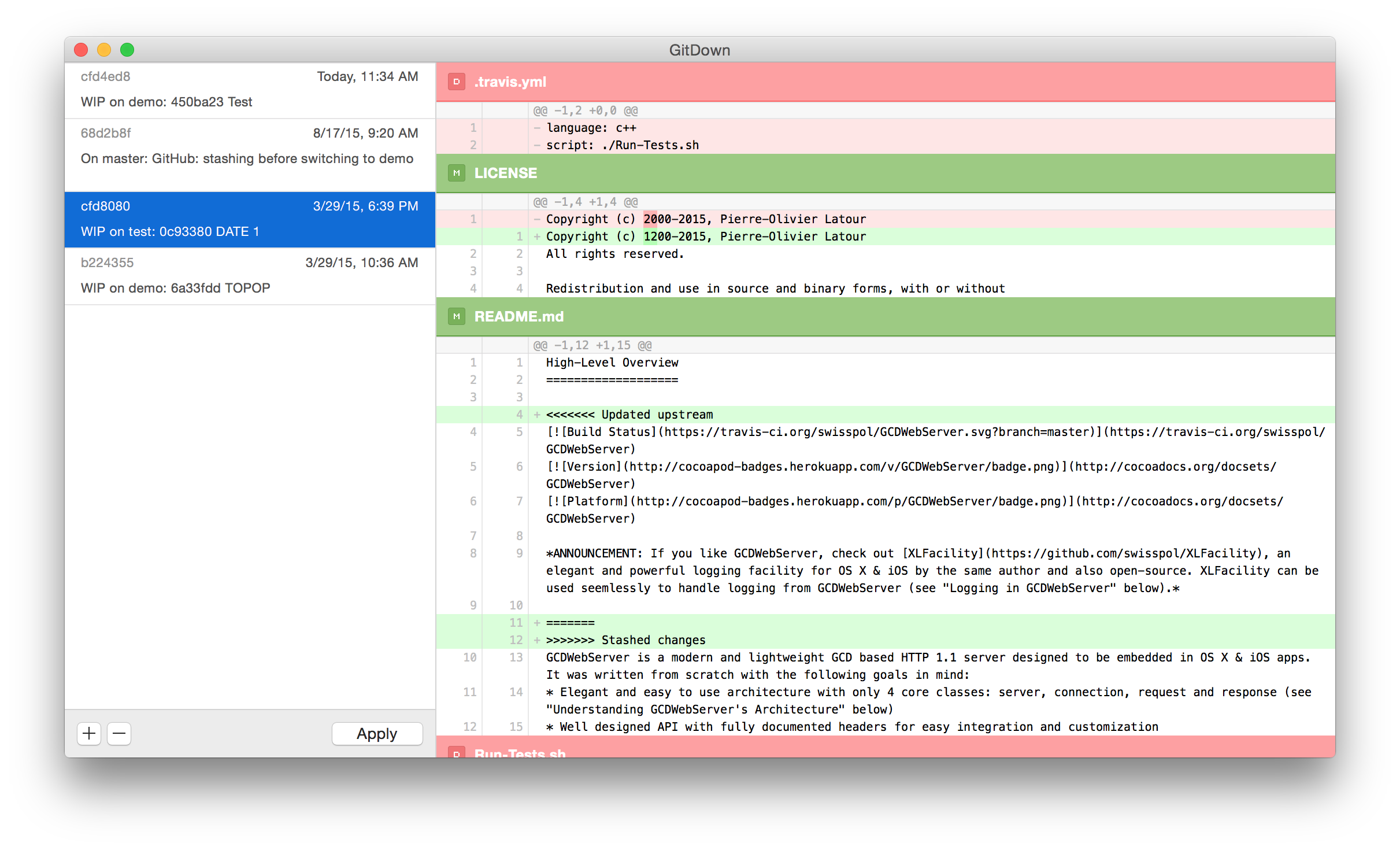 This source code also demonstrates how to use some other GitUpKit view controllers as well as building a customized one.

GitDiff demonstrates how to create a view controller that displays a live updating diff between HEAD and the workdir à la git diff HEAD: 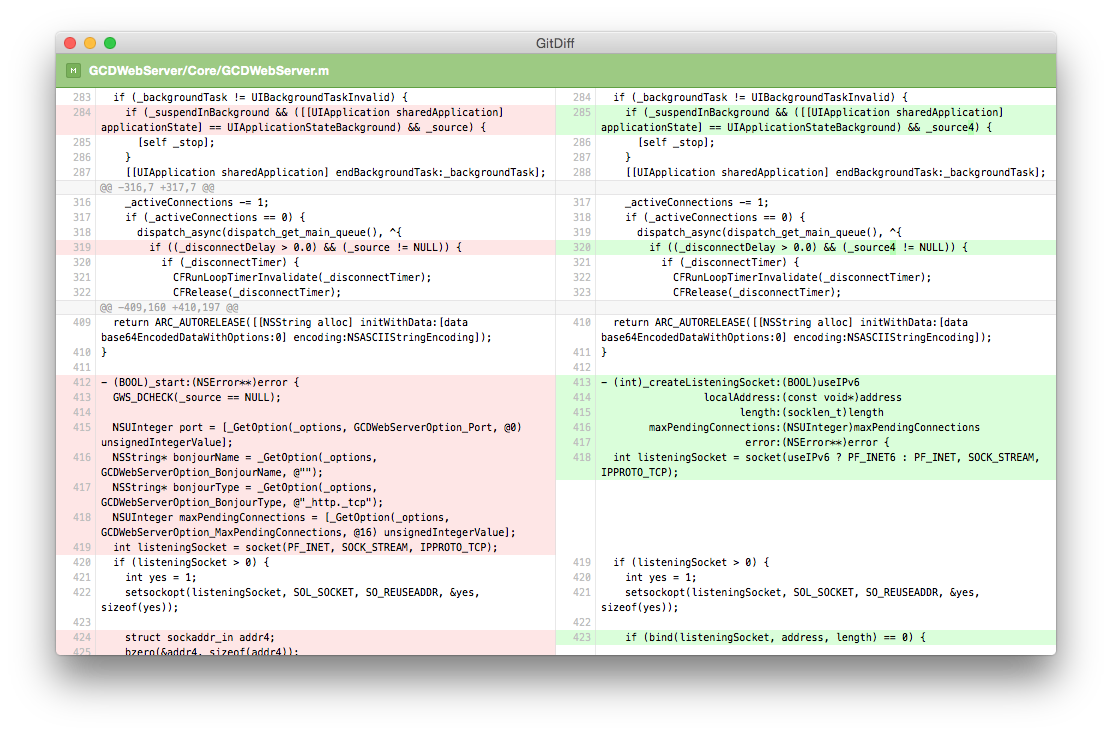 GitY is a GitX clone built using GitUpKit and less than 200 lines of code: 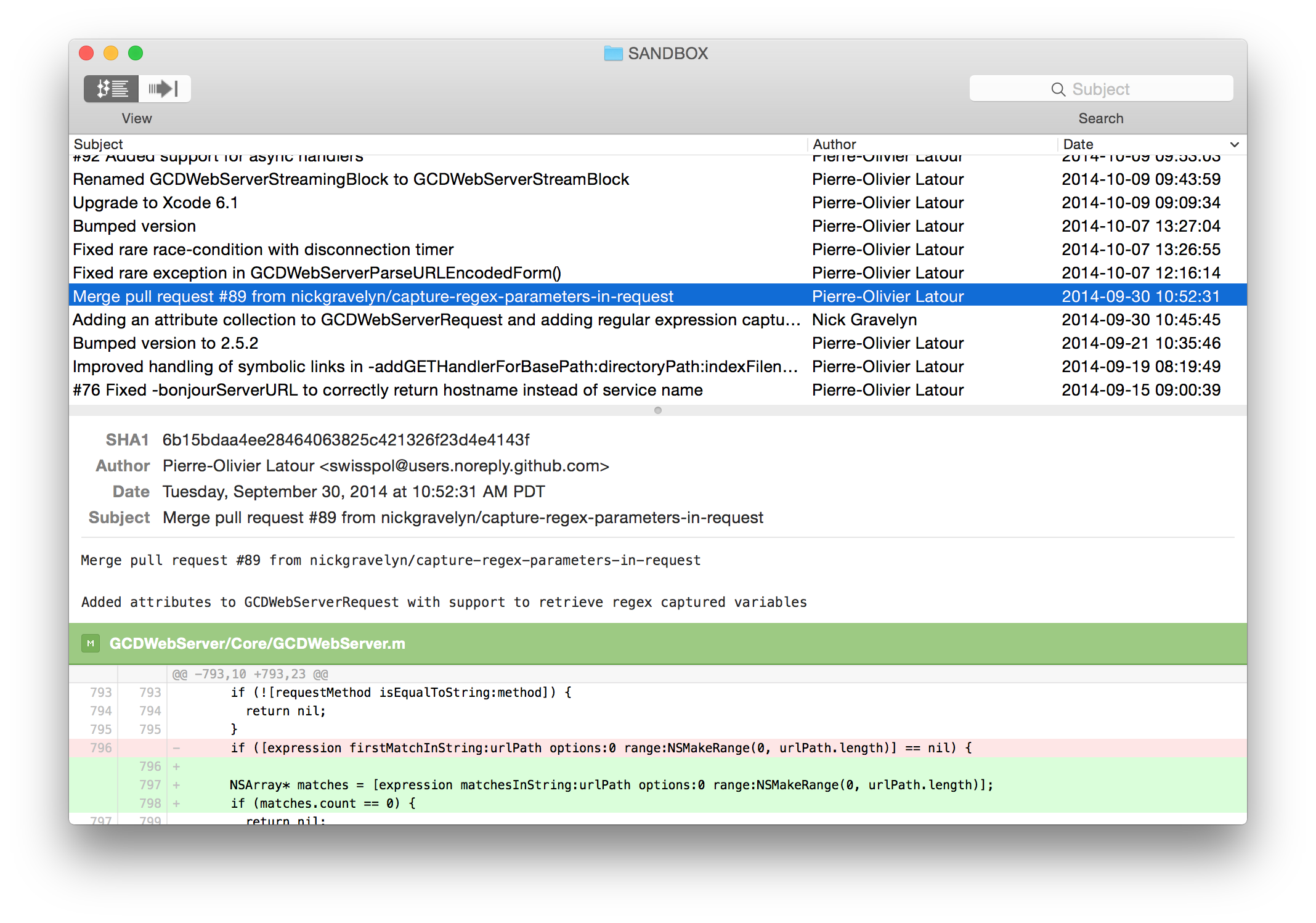 iGit is a test iOS app that simply uses GitUpKit to clone a GitHub repo and perform a commit.

Also a big thanks to the fine libgit2 contributors without whom GitUp would have never existed!

GitUp is copyright 2015-2018 Pierre-Olivier Latour and available under GPL v3 license. See the LICENSE file in the project for more information.

IMPORTANT: GitUp includes some other open-source projects and such projects remain under their own license.

The easiest way to install and switch between multiple versions of Xcode - with a mouse click.

Xcodes.app The easiest way to install and switch between multiple versions of Xcode. If you're looking for a command-line version of Xcodes.app, try x

ColorSet is a macOS utility and framework allowing developers to manage custom interface colors with ease.

ColorSet About ColorSet is a macOS utility and framework allowing developers to manage custom interface colors with ease. Rationale As of macOS 10.14

About CocoaRestClient is a Mac OS X app for testing HTTP/Restful endpoints. I love curl, but sometimes I need my output XML or JSON pretty printed. I

A macOS app which helps you manage dependency releases in your Podfile.

Pods Updater Why this app? I believe it should be up to the developer to determine the exact versions of dependencies used in their projects. When add

Cakebrew The Homebrew GUI App for OS X About Cakebrew is the most convenient way to use Homebrew for your daily tasks! It does for Homebrew what Synap

The unofficial WWDC app for macOS

Use the Touch Bar on any Mac

Touch Bar Simulator Use the Touch Bar on any Mac Launch the Touch Bar simulator from anywhere without needing to have Xcode installed, whereas Apple r